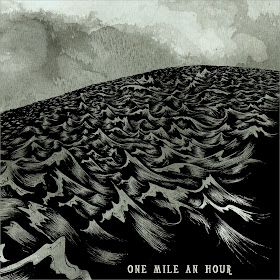 On their debut album entitled "One Mile An Hour"- Three piece Londoners One Mile An Hour create folk based songs that feel like medicine for the heart. Jeff Kightly's voice has a magical quality- soothing, healing and beautiful. The guitars swell and recede, bass rolls gently, picking pearly strings ring out and spartan drumming whisper more than scream on most of the songs though there is a sweet sultry slow burn on Magpie Song and some explosions of potent guitar on the emotionally wrought You Are On Beach. There is not a bad song on this album. Heading The Same Way with it's stair stepping chord progressions has a Beatle-esque patina and is very sweetly done. Trouble Roots feels as homespun Americana as a Southern porch swing with a languid melody and lush ooohs and aaaahs. The last track is live and called Nine Eight and is one steady long build with heavy guitar and what sounds like Fender Rhodes keys, dynamic drums and fluid bass lines. This feels like a free form monstrous instrumental jam that burns, cools down and ultimately finds this midnight drive groove. On one hand feels it out of place on this album but on the other hand might it could portend of things to come. I look forward to seeing what One Mile An Hour does next.
-
Robb Donker

You can stream the album on their bandcamp
And learn more about this English trio at http://www.onemileanhour.com/