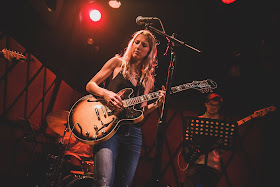 You end up liking or loving a song for a myriad of reasons but most importantly it is because it moves you in some way. It could be the vocal performance or a melody that pushes buttons and makes you think of particular moments of your life or it could be for reasons that are not always clear to you at the moment.

Build A Bridge by Canadian born, New York based Jenny Kern has from the onset a tender yet very sad vibe. That sadness is present in the sound of the guitar and the rushed feel of the cadence but mostly it is Kern's vocal performance that has a sense of resolution but reticence too. You get the sense that things have been tough through the "fight" and "tears" and things feel untidy. In Kern's sad reflective voice one wonders if there are doubts in her words when she sings "... things will get better." We have all been there.

THE FACTS AS WE KNOW THEM - PRESS NOTES

According to A&R Factory, with her first single Jenny Kern, “the Canadian-born, New York-based singer-songwriter hasn’t failed to amass plenty of attention with the magnetic vocal style and emotively piercing lyricism contained within Slow Burn. And it really isn’t hard to hear the appeal. Written within the melancholy of the candid and poignant lyricism is a generous serving of catharsis which will ensure that long after this track has faded out, the haunting introspective will stay with you.”
Jenny performed around Montreal during University before moving to NYC in 2013 where she started as a page at NBC and quickly worked her way up to producer in the film and television industry. In 2018 Jenny decided to take a leap of faith and pursue full time her passion for music and songwriting. Drawing on her own experiences, her songs unfold through a confessional-style delivery revealing the strength that can only come through vulnerability.
"It’s almost cathartic, sharing emotion. Being open is not an easy feat for anyone. I want people to know that these songs come from an honest place. We all struggle to find comfort in ourselves while being open to the unexpected.”
In the fall of 2018, she recorded her debut EP and began performing at notable venues around New York City including Rockwood Music Hall and The Bitter End. Jenny’s debut EP is an intimate collection of songs from years of self-reflection on her personal experience with self-doubt, regret and the search for comfort in painful seasons.
In January 2019 she released her debut single, which received wide acclaim and immediately found an international audience on streaming platforms.
“Jenny is expressive in her seriousness of her lyrics, she shows all the cards. Every ratchet of emotions, describes her struggles and valiant efforts to conquer. We are human, and Jenny understands. This experiment, called life, is hard. Jenny’s songs and storytelling makes things better.” - comeherefloyd
Shortly after she released her debut EP in April 2019, she was invited on her first international tour in Europe and was featured on MTV. “It’s been a whirlwind journey so far. One I would never have expected to happen so quickly. I hope to continue writing music that is new and different, resonating with people around the world.”
Jenny is currently touring across North America building a diverse and loyal fan base while continuing to write and record new music set for release early next year.