"What If I?" by North Carolina based Young Mister might just sweep you away in it's arms 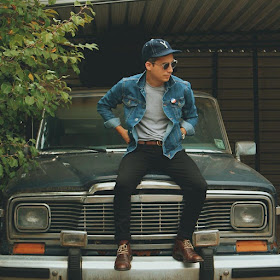 What If I? by North Carolina based Young Mister, the musical moniker of singer-songwriter Steven Fiore is a breezy indie folk swept track the chugs along with a wanderlust heart. Propelled on percussion and an easy beat it swings and sways on country tranced guitar lines but the heart of the song is Fiore's beautiful voice that is laced with a sort of bedroom eyed romance riding the rails between the iconic effortless coolness of Rick Nelson (R.I.P) and the roots rockish earnestness of Kevin Morby. Love this song.

His upcoming album Sudden Swoon is due out in September (2019).

Young Mister, aka North Carolina-based singer-songwriter Steven Fiore, has been stitching songs together out of the tossed-off scraps of life for over a decade now. Through an 8-year stint writing for Universal Music Publishing Group, to collaborations with artists as varied as Art Garfunkel and Ryan Cabrera, to sharing stages internationally with the likes of Albert Lee, Jeff Goldblum, Pete Yorn and Lori McKenna, to independently garnering over 8 million streams across Spotify and Apple Music, his eye for detail and ear for melody has always had a habit of disarming and charming music lovers worldwide. He writes like a journalist assigned to cover the human heart; no bombast, no hyperventilating, just honest truths about love and life that can only be expressed through the inscrutable alchemy of a song — and with his newest collection, Sudden Swoon, he might have accidentally reinvented not only himself but the entire process of releasing an album in the modern age.

Armed with a small but loyal fanbase, and with a creeping feeling of disillusionment towards the music business growing in his stomach, Fiore wrote the songs that would become Sudden Swoon without knowing how, or even if he’d release them. They paint the corners of the landscape from a life teetering between youth and middle age, love that’s balanced on a shaking tightrope, and dreams that seem to turn to smoke every time they get close enough to grasp. It’s harrowing, relatable stuff. As an album with its own identity started to take shape, and the songs kept coming, he realized that just throwing them online and reaping the streams would be less than the music deserved, so he partnered up with some good friends at Refresh Records and the Young Mister Record Club was born.
While he worked on the tracks in his home studio (affectionately dubbed ‘The Study’), he also posted demos online to record club members almost as soon as they were written. After sharing twenty songs, he let the members vote on which would get the full studio treatment and a slot on the album. While this kind of crowdsourcing could be anxiety-inducing, it was also liberating, and it galvanized that fan base into an even more personal connection with Young Mister’s music. Now set for release in September of 2019, with a finalized track list full of some of his sharpest writing yet, Sudden Swoon is poised to further the career of an artist whose literate, emotional pop songs always seem to find their audience, one way or another.
American Robb at 7:10:00 PM
Share