"Room To Breath" by L.A. based Isle & Fever is dream pop on high 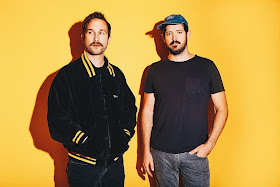 Room To Breath by Los Angeles based Isle & Fever feels like running away from or to something or someone. The sound of the synth keys feel whimsical and the overall tone power pop-ish, it exists in some shiny pop vacuum somewhere with Giorgio Moroder, Limahll and AHA orbiting close by.

Donald Eley and Tiger Smith are Isle & Fever crafting their inspirations in their basement studio in Echo Park. For those of you who don't know, this area of L.A. has some magical qualities. I don't know exactly why. No one does but it is true and a perfect spot for these guys.

When they play live (love to see them) they are backed by Antoine Diligent (bass / guitar / keys) and Thomas Bowden (drums). Cool.


THE FACTS AS WE KNOW THEM- PRESS NOTES:

isle&fever is a duo from Echo Park, Los Angeles that creates original songs from their basement studio control center. Their method is simple and fluid: pass around vintage instruments and the mic until a vibe catches. Rinse, Repeat. In the process, each song becomes an adventure, often comprised of many parts that rarely look back.
Donald Eley and Tiger Smith share a passion for the beat-driven classics of the 70’s and 80’s, while constantly embracing the new sonic textures of the 21st Century. They first started playing together in The Sea of Cortez and then founded the project Blacks&. isle&fever will be releasing their debut EP in 2017, which will be available on all online stores and in vinyl format from Stratford Ct. isle&fever are backed by Antoine Diligent (bass / guitar / keys) and Thomas Bowden (drums) on stage.