Shaylee and the psychedelic artful mind bending story of "Ophelia" 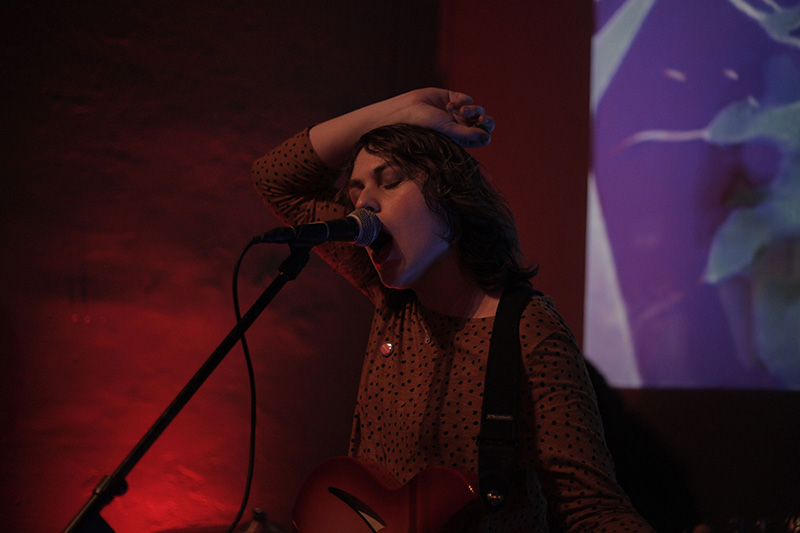 When I first heard "Ophelia" by Shaylee, the artful divergent indie rock project of Portland, Oregon's Elle Archer I was quietly stunned. There is something so artistically dense and for me, the song in tone and spirit feels like 60's / 70's Brit pop with art rock edges. The shifts and elegant structure feels like an amalgam of artists like the Kinks, T-Rex with a Beatle-esque swing. Elle, who is a queer trans woman, has a long history and attraction to music, as a teen playing guitar in Church and in jazz band in high school. Press notes reveal:

[She remembers mixing every element she’d hear on stage in her in-ear monitors, and then going home to toy around with what she had learned, in awe of the endless possibilities that come with sitting alone and reimagining sound. Elle also has a history of listening to and loving music, especially turn-of-the-century space rock opuses like Ladies And Gentlemen We Are Floating in Space by Spiritualized, The Flaming Lips’ The Soft Bulletin, Wilco’s Yankee Hotel Foxtrot, and Radiohead’s OK Computer.]

"Ophelia" not only spins in psychedelic ways but does so with askew poetic lyrics based on a real person as Elle explains:

[“Ophelia” is a song about the kind of romance that burns bright and fizzles out quickly. Sometimes love isn’t meant to last, but that doesn’t make it any less valid or visceral or real. These kinds of short, explosive relationships can provide some of the most memorable experiences life can offer, and my brief relationship with Ophelia during the first covid lockdown was no different. This song is an attempt to capture that lightning in a bottle to show the world what our love was like just as the wave began to crest.

Ophelia herself was a pure chaotic neutral hellbent on having a good time, even in the face of all our lives being put on hold, and that was such a radical departure from the way I’d been living my life up to that point that I couldn’t help but be completely enthralled with her. Our love was punctuated with all kinds of impulsive behavior, and while that was a ton of fun for a while, it eventually ended with me needing to separate from her so I could clean myself up. Still, I remember her fondly and I hope that despite the darkness lingering underneath the surface of the song that the unfiltered excitement of our love comes shining through the cracks. Just because love is fleeting doesn’t mean it’s not worth celebrating.]

At one point, the song literally spins out like an acetylene car crash, deconstructing and then blooms into something else. I can't help but imagine red velvet curtains parting to reveal a 60's pop chamber orchestration. It is a mind bender of a track.


As Shaylee, Portland, Oregon’s Elle Archer writes music that is expansive, lush, and heartbreaking. She’s been making music since she was a teenager, but her upcoming release, Short-Sighted Security, almost feels like her debut. “I’ve had so much time to grow artistically, it feels like a culmination of all the work that I’ve done up until now,” she says of the record. Spanning thirteen songs, the album is the result of a dedicated and deep love of music. It’s also a thematically unified record, one about failing relationships, growing pains, and falling short of your goals of self-improvement.

Elle, who is a queer trans woman, grew up enamored with making music. She cites early experiences as a teen playing guitar on church worship teams as well as in her high school jazz band as heavily formative. She remembers mixing every element she’d hear on stage in her in-ear monitors, and then going home to toy around with what she had learned, in awe of the endless possibilities that come with sitting alone and reimagining sound. Elle also has a history of listening to and loving music, especially turn-of-the-century space rock opuses like Ladies And Gentlemen We Are Floating in Space by Spiritualized, The Flaming Lips’ The Soft Bulletin, Wilco’s Yankee Hotel Foxtrot, and Radiohead’s OK Computer. You could say that Short-Sighted Security is a tribute to indie music, a study of a lifelong obsession with the jangly hooks of indie pop, the grandiosity of post-rock, and the lean toughness of indie rock, all wrapped up with the wide register of feelings associated with those early days of listening to songs that changed Elle’s life.

Short-Sighted Security is also a record that is as DIY as they come. Recorded almost entirely alone in a living room in Portland during the first lockdown of the COVID-19 pandemic, Elle did everything on this record, she plays all the guitars (for the heads: she used a Rickenbacker 330 for nearly every track on the record), a prized Roland Juno 60, the drums, and the bass. She also sings, mixes, and engineers. The only other musicians she enlisted are her friend Matt, who is credited with organ, violin, and cello on a couple tracks, and her friend Travis, whom she credits with bongos, and crucially—whispers. This sort of intense precision and dedication is clear from the album’s outset.

Opener “Oblivion,” features quivering vocals, and intricate guitars that slingshot like rubber bands thrusted into deep space. The track vividly immerses the listener in darkness with a deft mix of paranoid psych rock, jazzy chromaticism, and spacious, burbling synths. “They called me out and I deserved every bit of it/So I stepped out, stepped outside for a cigarette,” she sings, immediately honing in on the idea that this is a record about simmering in your feelings, detailing the rumination stage that comes before actively trying to change the ways in which you move through the world. Second track “Ophelia,” splits open in the song’s final third, exposing a network of crash cymbals, spectral pianos, and ecstatic vocals. The song is otherworldly, a bricolage of ‘60s British invasion bands like the Kinks and noisy, overblown indie pop that travels in the most unexpected of directions. The kinetic “Danger Decides,” is both a light at the end of the tunnel and a relapse on bad behavior—An exuberant mission statement of debauchery set to anthemic power pop, all decadently laced with mellotrons and glockenspiels and outfitted with one of the record’s most infectious hooks: “I’ve got a new lease on life,” Elle proclaims in a seeming moment of clarity, only to deliver her sinister conclusion, “Danger decides.”

Some of the record’s most beautiful moments come from its most candid lyrics. Take “#1 Destroyer Fan,” a song that almost feels like a diary entry. “Purple, white, grey, black flag hung above where we were fags/ A chasm forming in your head/The last time I saw your bed,” Elle sings in one particularly intimate part of the song, evoking a memory of an intense experience she wishes she handled better. So much of life, the song seems to say, is spent recognizing where you need to grow but not knowing the right way forward. That throughline can be found in every corner of this record. Short-Sighted Security reads like a lonely cautionary tale set to the soundtrack of a deeply musical mind with a singular vision, making for an ambitious label debut that establishes Shaylee as a force all its own.
Shaylee, indie rock, alt rock, Power Pop, Indie Rock, Indie Pop, queer trans woman artist, singer songwriter, multi-instrumentalist, vocalist, guitarist, Portland Oregon, "Ophelia", Elle Archer
American Robb at 5:05:00 PM
Share