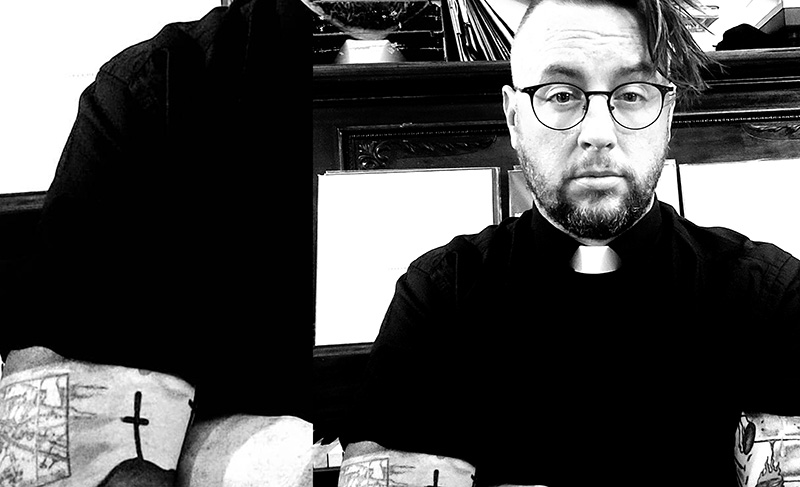 Zuneg is the shape shifting musical project of Omaha, Nebraska born artist Tim Mechaley. His 2018 debut album "Out of Dust" focused on songs with one singular instrument plus voice and the songs like dark velvet curtain diorama's felt somber in the least and at most, bleakly cynical. Songs like "Little Black Suit" (she will die) stair steps down into a sort of gothic folk torn piece of despair or "Krist", an even darker alternate universe of Kurt Cobain's end can take you deeply inside, even shock you. Tim's need for dark creativity also extends to doom choir music, another manifestation of sounds. Doom choir music exists as an open source music project for anyone to use (from dj's to indie filmmakers, or anyone in between). The sounds might be described as dark house, gothic and apocalyptic in nature.
One of Zuneg and the doom choir's latest sonic apparitions is "perfection_is_the_enemy_of_beauty", a sort of industrial punk mantric soundscape. Tim shares this: (it is) "a post-gothic song about that one goth girl that moved me a lot as a lover".  Amid a stoic beat and droning heaviness, the vocal aesthetic feels like an amalgam of religious chanting and an otherworldly, other planet's opera. The interplanetary travel feels too brief, a surreal interlude maybe.
-Robb Donker Curtius


Zuneg is the ever changing vision of Tim Mechaley. An Omaha born artist with influnces in dark and loud music. Zuneg’s debut album “Out of Dust” focused on one voice and one instrument per song. Using his voice as the primary instrument on “Out of Dust” Tim set out to make the album feel like the listener was listening in a cabin in the woods, with only two instruments filling the room with sound. Songs like “Out of Dust” capture the darkness of reaching the end of one’s emotional rope. While songs like “Little Black Suit (She Will Die)” deal directly with the thought of someone dying and having to bury them due to their choices. Meanwhile, “The Ants” deals with the commercialization of Christmas and “Krist” asks some insensitive questions of the members of Nirvana after their friend dies. While Zuneg is a new project, the lyrics and themes will appear mature in nature and explicit in ways the truth may sound when unfettered. Tim is already working on a second album that is electronic in nature and much heavier than this sad piece.
We need your help, love and support.