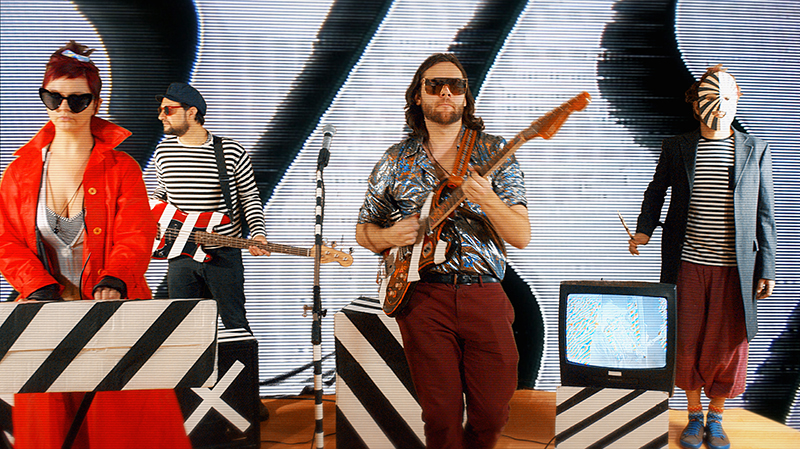 "Turn To Rust" by Canadian art-disco-post punk quartet AUS!Funkt with it's sinewy bass line, captivating drumming manifest, eclipsing electronica and mysteriously aloof girl / boy vox sucks you into an atmospheric otherness that feels darkly romantic. Elevated by the surreal cinema of the Official Video starring Prince Amponsah and the unanswered questions are ramped up by a thousand. Amponsah's performance is exquisitely alluring. An actor who lost his hands in a devastating house fire which left him severely burnt has a commanding swagger as his countenance and body movements are crystal clear against a glowing, yet hazy projection of the Toronto nightlife is magnetic and as press notes describe:
[...translate the idea of being physically detached from our world. Like Plato’s Cave, the man is looking to free himself from the shadow puppets, but ultimately as he finds the light, he also “turns to rust”]
The sonic and visual imagery is so unique and ultimately so artfully, darkly beautiful.
-Robb Donker Curtius

Rejecting the lyrical and musical excesses of rock music, AUS!Funkt combines the groove of electronic music with the subversive aggression of post-punk. The lyrics, spoken and sung, provoke the mind with their realism and repetition. Electronic beats seduce the body into movement, freeing it from its torpor. On top, the guitar spurts out clouds of noise, while the bass supplies the melody. AUS!Funkt assaults the senses and uneases the mind while you dance to its unsettling disco beats.