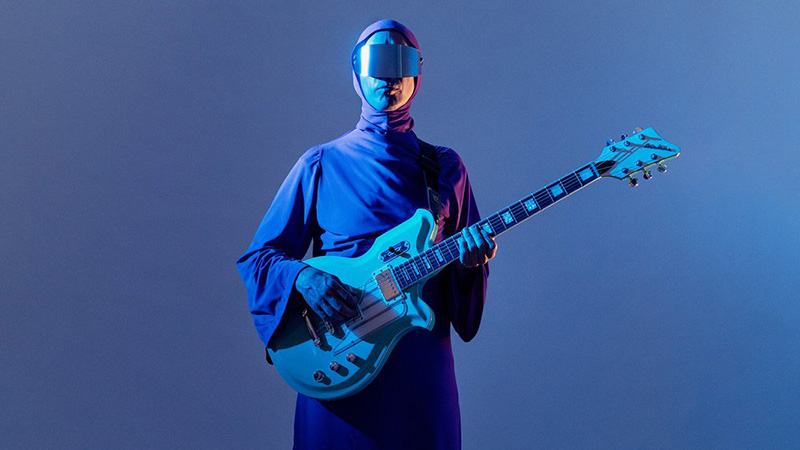 "Ciao To The Beauty" by Canadian avant pop singer-songwriter, multi-instrumentalist, producer Harkness is one of those songs that is hard to describe because it is utterly original. There are classic conventions (some that remind me of the stuff of 50's musicals) to wild sonic abstractions that have that kind of late 70's proto art punkian freedom. Whether nature or nature and likely a product of both constructs, Harkness was the child of two wildly talented musicians and was playing piano at 4 and guitar at 12.
Listening to the surreal nature of "Ciao To The Beauty" but steeped in such a grand pop sound I thought of a sort of amalgam of  late 90's Flaming Lips, late 60's Beach Boys, late 70's Bruce Woolley and the Camera Club with a dash of Sparks (circa Kimono My House). I could easily think of other iconic artful artists later but for now, those come to mind. If Harkness is reading this and has not heard of Bruce Woolley and the Camera Club I hope he pokes around on line and familiarizes himself with them (smile).
Also love that Harkness literally plays / creates everything you hear: all vocals, guitar, bass, piano, and drums. AND let's be clear here, when you hear a tuba or a Hammond organ, it is just that. Harkness is into real instruments, not virtual ones. Whether it is Harkness at his multi-instrumentals self or musicians he bring in, what you hear iswhat you get. Just wow, fucking wow.
-Robb Donker Curtius

HARKNESS · CIAO TO THE BEAUTY

Born in Toronto, Canada, Harkness is the 2nd in a brood of 5. Both his parents were talented musicians. His father fronted The Al Harkness Orchestra a band consisting of horns and winds along with a traditional rhythm section. His mother was a top French horn player at North Toronto Collegiate, a high school known for their music curriculum, as well as a beautiful piano player, who taught the local kids, including her own while they were growing up.

As a child, in order to listen to his Dad's vast record collection, Harkness would often fake sick and spend full days at home hanging out listening to John Lennon, Stevie Wonder, Chicago, The Carpenters, Billie Holiday and Miles Davis.

Playing piano since the age of four, it wasn't until Harkness was shown his first guitar chords by a friend at age 12 that the fire to pursue music was lit. Recalling that moment he says, "It was almost eerie how easily it came to me, hearing the music come straight out of my hands felt so powerful, it was an immediate high that I knew I couldn't live without. Right away I started writing my own songs."

He dropped out of school at age 17 to go on tour, and never looked back. He played all over Canada, U.S., U.K. and Europe, with a number of musicians and bands including Paul Humphrey, Sara Craig, Nicolette, Chunk o’ Funk, The Stars, The Suns, Creature, Kong, Snipejoint.

"I was shown what appeared to be the blissful advantages of leading an imageless life," says Harkness when asked why he wears the gown and visor. “In the age of ‘look-at-me selfies’, I choose to go in quite a different direction.”

To facilitate the expense of maintaining his studio and paying other musicians to play on his songs, Harkness has spent many years in the restaurant industry serving tables, during which time his love of cooking flourished alongside passionate discussions with Chefs encountered along the way. Don't be surprised if one day you see the Harkness Psychedelic Rock and Roll Cooking Show. He’s already packaged and is selling his famous Harkness Hot Sauce.

"I really do believe that deep down we are all the same and feel compelled to share what we've created,” notes Harkness. “Hopefully as others experience these songs I’ve created, they'll recognize miraculous things about themselves, just as I have about myself."

Despite all of the warm 3 to 5 part vocal harmony and sophisticated hooks, there is a dark undercurrent brewing underneath the surface of much of this music. A reflection of the chaotic division expressed throughout the world around us.

"Ultimately though,” adds Harkness, "I hope that while listening to these songs, people at once feel the urgency and desperation of our time but are inspired and emotionally moved enough to take steps in their own life to help improve our collective world."