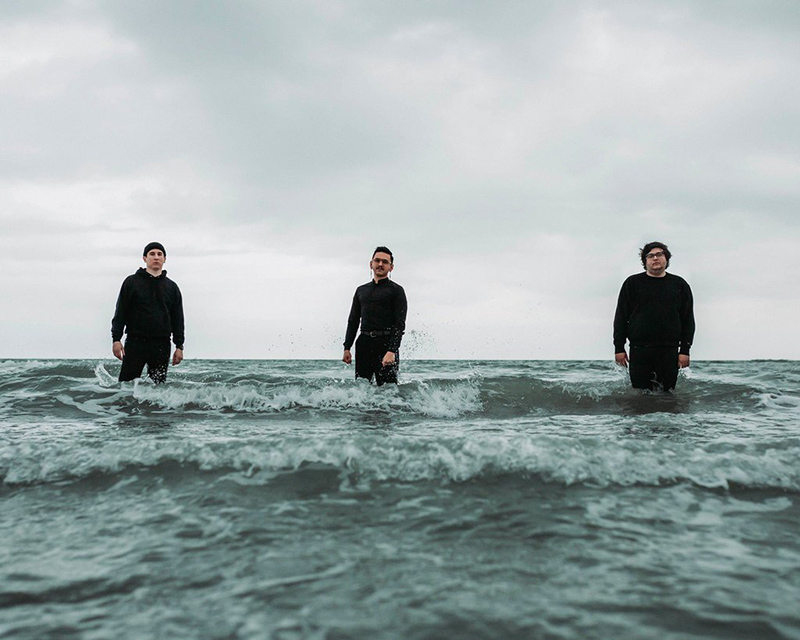 "cast off the curses"

Sword Collector is a post punk outfit out of Texas with dark wave, gothic affections in their sound. On Inherit The Scepter the band mine personal pain with their penchant for evocative dark fuzzy synths sounds, haunting keys, industrial toned guitars, machine beats and eerie ambient touches that proved a framework for Kyle James McCoy's deep resonant vox. McCoy's vocal aesthetic is sort of steeped in a proto punkian theatricality. On this track he is opening deep wounds and shares:

"I wrote 'Inherit The Scepter' as a means of healing from the bizarre forms of emotional abuse perpetrated by my biological father. From having his friend call the police on my wedding to staying in a romantic relationship with a woman that tried poisoning my sibling and me, he left in his wake a lot of trauma that's hard to escape. In this song, I remind myself to find lessons in my past without letting that past take control of my future. By releasing trauma's grip on my actions, I reclaimed my power. With this mindset, I've managed to build boundaries and create a healthy relationship with my aging father on my terms."

Songs can be sonic bridges of catharsis, inspiration and weapons of change.


Sword Collector, who formed mere moments before the US COVID-19 quarantines, have social distancing built into their creative process. The band is composed of a South Texas triad: Kyle James McCoy (bass/vocals; they/them) of Houston, Ryan Johnson (guitar; he/him) of Austin, and Carlos Cooper (synth/drum machine; he/him) of Corpus Christi. For their debut EP, each member recorded in their respective home studios, sending the final tracks to guitarist Ryan Johnson for mixing, then to John Allen Stephens of Third Coast Recording Co (The Suffers, Camera Cult) for mastering. No more than one person was in the room during the writing and recording process at any given time.

In their short time as a band and with the restrictions presented by COVID-19, Sword Collector have garnered a smattering of local, national, and international headlines from New Noise, IDIOTEQ, The Bend Magazine, and Teal Cheese. Their music and community building efforts have inspired a small but passionate following, including musicians that have learned their songs for covers.

The band's musical union began when the three old friends, once all Corpus Christi natives, decided that they missed one another deeply. Spending their formative years as active members of their local hardcore punk scene, Johnson, McCoy, and Cooper built a lasting friendship on the foundation of music. After nights sharing visions of their new musical identity, the band established core principles of sonic exploration, radical vulnerability, and mystical esotericism. Over the sometimes-dreamy-sometimes-eerie soundscapes of Cooper and Johnson, McCoy explores existential desires, reclaims autonomy after surviving abuse, and grows the connection with their fluid gender and sexuality.