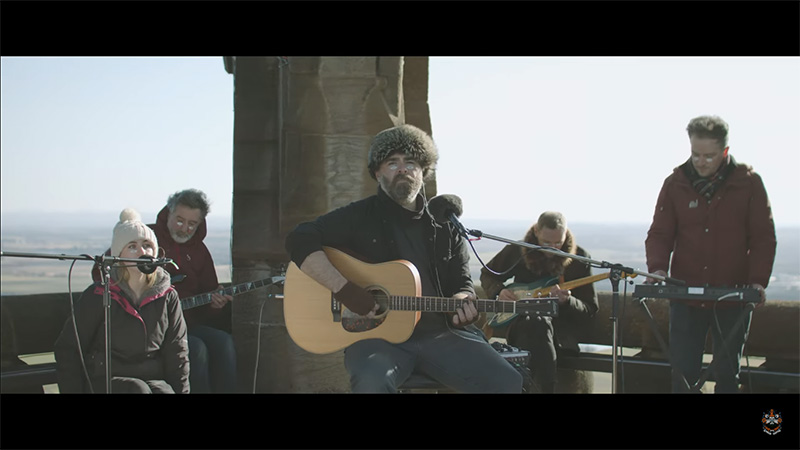 "This thing is real / It's black and broke and dying..."
We all know about the Beatles rooftop performance in 1969 atop the Apple Corps headquarters in London's fashion district but the Scottish ambient / experimental / dream pop / folk indie five piece Constant Follower has taken this mode of expression to new heights performing live from The National Wallace Monument overlooking their hometown of Stirling from a dazzling height. AND while they don't have the added benefit of a Billy Preston, they nonetheless are able to transport you with a sound that gets deep inside your head and heart.
The band centered around frontman singer-songwriter Stephen McAll perform three songs from their 2021 debut album "Neither Is, Nor Ever Was". The featured tracks "The Merry Dancers On TV", "Weave Of The World" and "I Can't Wake You" are perfectly rendered and while I might not ascribe the descriptor psychedelic to Constant Follower's overall sound but I would describe their sounds as, well, psyche-delic because McAll's plaintive sonic countenance and Constant Followers evocative sonic cinema does somehow penetrate your soul. The thing is, his lyrical passages don't even have to be fully heard to sink down and pierce your psyche. I mean, there is something both ancient and freshly classic about the lilt of his voice and the temper of the cadence that soothes you while making you exquisitely pained or hopeful depending on the lens you view his sonic imagery through. There is a sense that you can come back to these songs like a pool of water to dive in many times over and come back with different perspectives each time.
Maybe it is because his feeling are, in essence, reclaimed like withered memories made shiny, polished up and multi-sided. Press notey stuff (bracketed) illuminate the reasons why:
[Constant Follower’s drifting, heart-rending sound is a dreamlike reflection of McAll’s own life. He was randomly attacked on his way home from his girlfriend’s house one evening near his 17th birthday in Glasgow The catastrophic head injuries left him partially paralysed, unable to write or play guitar, and with all of his childhood memories up until that point gone. He spent the next decade on Scotland’s windswept West Coast, recovering, and gradually re-learning how to play guitar. He began reading the poetry of Norman MacCaig, as it was the only prose he could follow, and eventually the songs that make up his stunning debut began to emerge. The writing on the album breathes the salt spray, and the gentle beauty of the Scottish expanse.
Constant Follower frontman McAll said: "I don’t remember my childhood, but my mum took lots of photographs. I look so happy in the pictures of us at the Wallace Monument. I see how magical it is for my own children – the building, the mythology, the huge sword – and can only think it must have been the same for me. I see it every day when I open my curtains and wondered what it would be like to play up in the crown overlooking the city, and why no one had done it already. So it was a great surprise and an honour when Stirling Council made it happen. To be able to play while stretching our eyes over this beautiful landscape… sometimes it was hard to sing for the lump in my throat."]
By the way, the filmic Live National Wallace Monument performance as filmed and directed by Martin J. Pickering is so beautiful and elevate Constant Follower's performance in many ways.
-Robb Donker Curtius
(Live Dates Below)


The band’s debut album Neither is, nor ever was was borne out of a respect for change, and the inevitable passing of time that frightens, comforts and humbles every one of us. It is a haunting testimonial to the temporary joys and fleeting moments that define the human experience. Co-produced by Scottish singer-songwriter Stephen McAll and renowned producer and Shimmy-Disc founder Kramer (Low, Galaxie 500, Will Oldham), the recording for Neither Is, Nor Ever Was began in early 2020 at La Chunky studios in Glasgow with engineer Johnny Smillie. This was interrupted by the birth of McAll’s daughter (if you listen closely, her cries are just audible during some of Kessi’s backing vocals on ‘Little Marble’), and shortly afterwards by Covid 19 restrictions. McAll began recording the rest at his own CFFC studio in Stirling. The resulting recordings were then mixed and mastered by Kramer at his Noise Miami Studio, to breathtaking effect.

Each album track is accompanied by its own short film. McAll sought-out the most exciting new talents in Scottish film and animation and invited them to be part of the album project. Each video, the artist’s personal response to the song, with no direction or interference from the band, resulting in incredibly moving and enchanting short ‘films’ in their own right (with multiple film festival considerations including Edinburgh International Film Festival and Manchester Film Festival in process).

Ever since the Scottish “soaring-ambient-dreampop-experimental-folk” band began releasing music more than three years ago, Constant Follower’s emotionally honest and pain-stricken, yet warm, lyrics have become one of the project’s most endearing and beloved qualities. The name of the outfit itself is a reflection of those things that we carry through life, for better or worse, that ultimately define who we are. Described by Folk Radio as “instantly compelling, memorable and moving,” Constant Follower have already been championed by the likes of BBC 6 Music’s Gideon Coe and BBC Scotland’s Vic Galloway. As a teenager, McAll woke in hospital to find he had survived an attack by a gang that left him with a catastrophic head injury and every memory of his childhood gone. The next decade was spent in a cabin on the West Coast where Hebridean air was whipped in with the time to reflect and recover, eventually allowing him to begin songwriting again. The songs were originally recorded as raw ideas - thoughts and feelings forged in fleeting moments and recorded onto old cassettes as the wind howled outside. The result is a childhood imagined against a backdrop that, like the sea, is as serene as it is wild; ever-changing, yet resolute. Constant Follower have an unbridled gift for tapping into the thoughts and feelings that permeate the human experience, no matter what walk of life this takes.

vocals and synth, McAll’s partner Kathleen Stosch on backing vocals, synth and bass.
As well as a handful of July dates, Constant Follower are currently gearing up for a string of ‘Scotland on Tour’ dates, starting on 20th October in Tighnabruaich and ending on 30th October at Lochinver. See below for full dates:

+ + +
We get by with a little help from our friends